A Brief History of Norco

Norco: Paradise on a half acre.

Written by City Councilman Kevin Bash
“The first true community to be developed in the Norco Valley was known as “Citrus Belt” in 1909: prior to this future Horse Town USA was home to scattered alfalfa farmers, cattle ranchers, coyotes, rabbits and rattle snakes.

Prospective homeowners were told with a bit of hard work, they too could turn a ten-acre piece of rock hard land into a Paradise by cashing in on the citrus boom just like Corona to the south. Unfortunately, the Valley was prone to frost and the Santa Ana Winds: meaning what lemon or orange trees didn’t freeze got knocked flat by gale force winds.

But, the early pioneers banded together, didn’t give up, and began to plant seasonal crops such as berries, potatoes, and other crops that were cultivated before the frost season and too low to the ground to be blown over.
In 1920, Rex Clark purchased the struggling community and in 1923 renamed it “Norco”.  His goal was not to simply create an agricultural suburb of Corona, but, a standalone township with a vibrant downtown complete with general store, restaurants, Movie Theater and other shops, surrounded by small lot weekend getaway homes followed by ranches and farms producing grapes, berries, lettuce, and hogs.

But, very quickly it became clear that Norco’s future rested with chickens: seems the climate was perfect and the industry thrived.

The early and very tough residents banded together to build the community and took on floods, drought, bad roads, and, eventually became famous for their “Norco Spirit”. 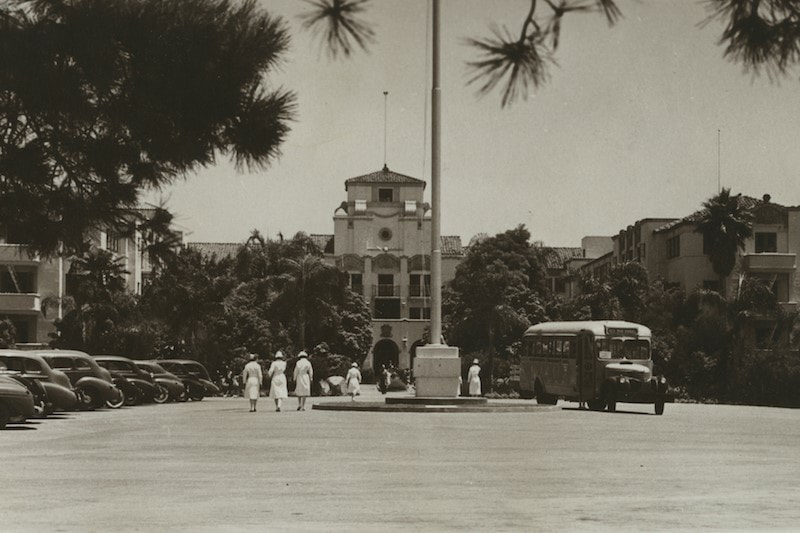 1944: US Naval Hospital Norco - Former Norconian Clubhouse
​Clark’s plan for a down town were derailed when he opted to pour millions into the famed Norconian Resort that ran smack into the Great Depression buzz saw.  With the collapse of the California poultry market in the 1930s, the community of Norco was brought to its knees and barely alive by 1941. Then, Uncle Sam saved the day by sending the US Navy to the rescue in the form of a major US Naval Hospital.

This “ship that never sails” took over the Norconian grounds and within five years employed hundreds and saved the town.  After the war, many a Sailor and Marine tired of the winters in middle America stayed in Southern California and the greatest building boom in US history began: but, not in Norco!

Clark stuck to his guns that a man needed one place on this earth were “he could care for his family with his own two hands on his own plot of dirt”. He refused to improve roads and water facilities, thus stopping cold efforts by developers to build “cracker box, rat cages” in Norco.  His dream to stay rural got a big boost by equestrians zoned out of Orange County who flocked to Norco and decided to take a stand in the exact spirit of “the Alamo”.

Cowboys banded with chicken farmers and resisted all efforts to “citify” Norco and eventually against all odds incorporated themselves in 1964 to protect their rural lifestyle: then they fought like cats and dogs on exactly how that should be accomplished.

For the next two decades, residents punched, kicked and yelled trying to figure out how best to protect their increasingly endangered rural lifestyle and by the time the freeway came through in 1989, Norco knew who they were: a large lot, equestrian and animal friendly community and woe to any developer who wanted to cut up a half acre.

Today, Norco is known as Horse Town USA and is a patch of green and open space in the middle of a sea of concrete communities, nice communities, but, concrete nevertheless.

So, welcome to one of the last southern California locations were folks can still find their own piece of Paradise on a half-acre of land.”